Horse games can be super entertaining, but one can get bored with running around a track all day. That’s why we’re here with the 5 best horse jumping games for Android that we could find in the play store. The following games range from quirky to fun, and to downright competitive and entertaining. Although we advise you don’t take these games too seriously as they can become really, really addictive. 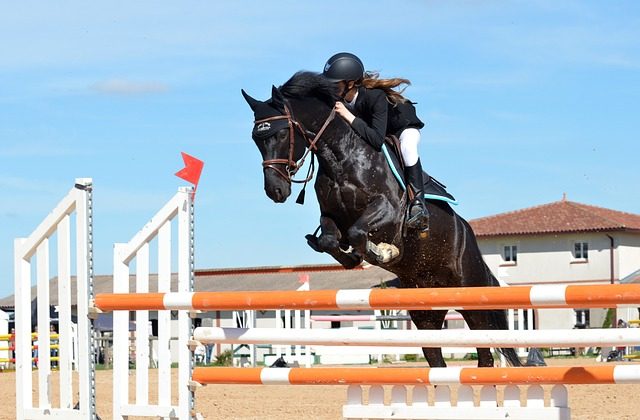 We will showcase the best possible features of these games, along with a few of our user opinions for each of them. Don’t be surprised if you don’t like one or two of these horse jumping games as they’re not developed by any major gaming company. Most of them are just cute little mini-games that you can have fun with while waiting in line at the supermarket. Still, they are enjoyable nonetheless.

Okay, this game doesn’t really feature horse jumping in the sense of show jumping, but you do get to jump a lot with this horse jumping game. Based on the astonishingly popular Temple Run, this game also features an Indiana Jones lookalike trying to run out of a temple. But instead of using the power of his legs, he flies off on his beautiful peach horse.

In the game, you take on the person of one James Ben. He is being chased by some sort of man-demon. This character looks like a man with oversized hands and wielding a mace. Obviously, this guy is also on horseback. Like with the original Temple Run, here too you have to move to the right or to the left, jump, or duck. The other horse jumping games will probably be more interesting than this one, but still it’s a great deal of fun.

Overall, it’s a pleasant game, however, much not-authentic. One downside to it would be the strange pacing of the game: the obstacles are sometimes placed way too close to each other for you to be able to jump correctly.

Set on a wild adventure and jump through the track and over strange obstacles with this weirdest of the weird horse jumping games. First of all, in the tutorial level, I had to try three times before I managed to get the direction right. You can steer your horse by using the touch joystick at the bottom left corner of your screen. When getting close to the hurdle, you have to press the jump button on the right.

Getting over the first level was pretty tough. Strangely enough, once I did get to jump the obstacle the right way, applause started coming from all over, although this horse racing game features no visible audience. On to the second level, and the results were disastrous. I only barely managed to complete the level after five consecutive fails. I’ll give them that: the game is hard, but I’m not sure that was the developers’ intention.

This game is fun if you’re stuck on a desert island and have absolutely nothing else to do. One other fact: you can choose your horses. I picked a beautiful white Arabic horse, but for some reason, all I got was still the boring brown one.

We take everything back! This is the wackiest weirdest of all the horse jumping games ever. Besides the graphics which look so 1990s, the game itself feels like it was designed in 40 minutes tops. The horse moves while the grass and the sky stay perfectly still.

Still, the game has some redeeming qualities. It reminds me of retro games from the ’90s. Side-scrolling games that were pure fun. This games will make you laugh, albeit we don’t know what’s more laughable: its poor quality or its clunky game mechanics.

If we were to rate this in the horse jumping games category, we’d say it’s not in the category. However, that’s how it’s advertised and it’s also been voted the 3rd-best by Google Play users, so who are we to argue? 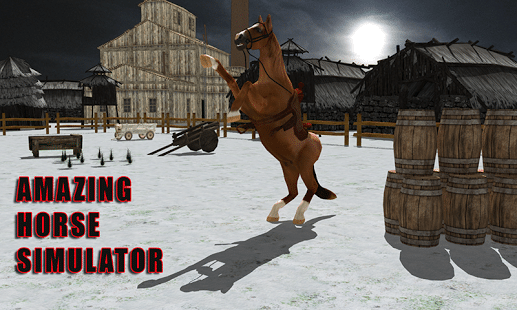 Oh, how interesting: a horse jumping game using actual photographs from real life in order to advertise itself. Let’s see what it’s all about! Snow Horse Jump Simulator is a nice game, really. Compared to the other ones we’ve talked about here, this one has style. The map looks okay, the horses look decent, and the gameplay seems reminiscent of an actual horse jumping game at the Olympics. But then come the bad parts.

First of all, you don’t have a rider. At all. So the horse is just going around the track jumping all by itself. The control joystick is clunky. It just barely works. The horse gets extremely tired fast, so you need to find a water source to give to it. Although we appreciate the combination between a show jumping track and a farmhouse and the free roam ability.

Overall, this is ranked as the 2nd-best of horse show jumping games on the Google Play stores. It probably deserves that spot.

This should be the best of all the horse jumping games. And, wouldn’t you know it, it actually is. After you install it, you open it and there’s just one big button: start. You press it and magic happens! You are shown a ‘player profile’. Here, we see that we have $650, 0 horses, 0 events held, and 0 wins. At the bottom of the screen, we also have the option to turn a pixel shader on or off. Also, the rider’s coat can be changed.

We press ok and proceed to buy Deep Lake – a beautiful red female horse with a white stripe on its forehead. We’re even going to have $60 spare change. We proceed to the ’01 Jumping Contest’ with an astonishing prize of $60 and 5 horses competing (including my Deep Lake). I lose miserably, coming up in 5th place with a prize of $0. However, the game itself is easy to master.

On my next try, I actually finish third, with a prize of $15, barely enough to get me through the day. The trick with this horse jumping game is to stay the horse easily just before a jump, enough so that you can time the jump, but not too much so that you can still take the jump. Overall – a decent game. 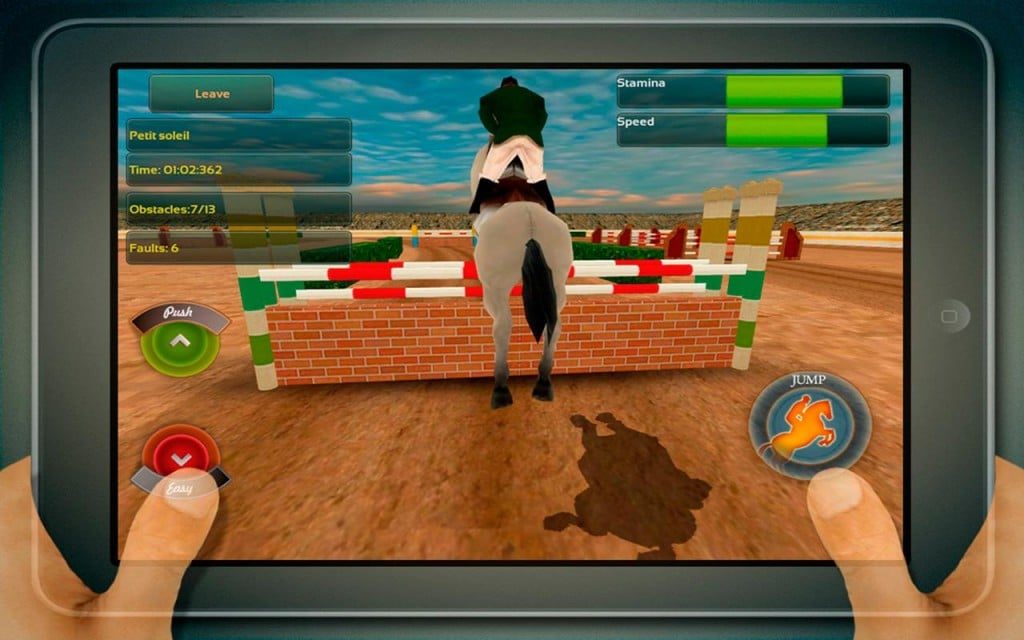 We admit that the quality of horse jumping games out there is not as high as it should be. However, if you struggle hard enough, you will find some decent games worth a try. Such as the ones we’ve mentioned here. Let us know what you think and if there are any more or better games you would like us to include. Leave them in the comments section!