The American Paint Horse is one of the most highly valued horse breeds in the United States. Its unmistakable color and markings make it a favorite among horse lovers but it is also preferred to other breeds because it has a gentle nature and uncommon intelligence. It is the remarkable history of paint horses, their sturdy muscle build and competitive nature that has made them icons of the horse world. Like the Quarter Horse, the paint horse is extremely versatile and easily adaptable to work on farms, competitions and pleasure riding. 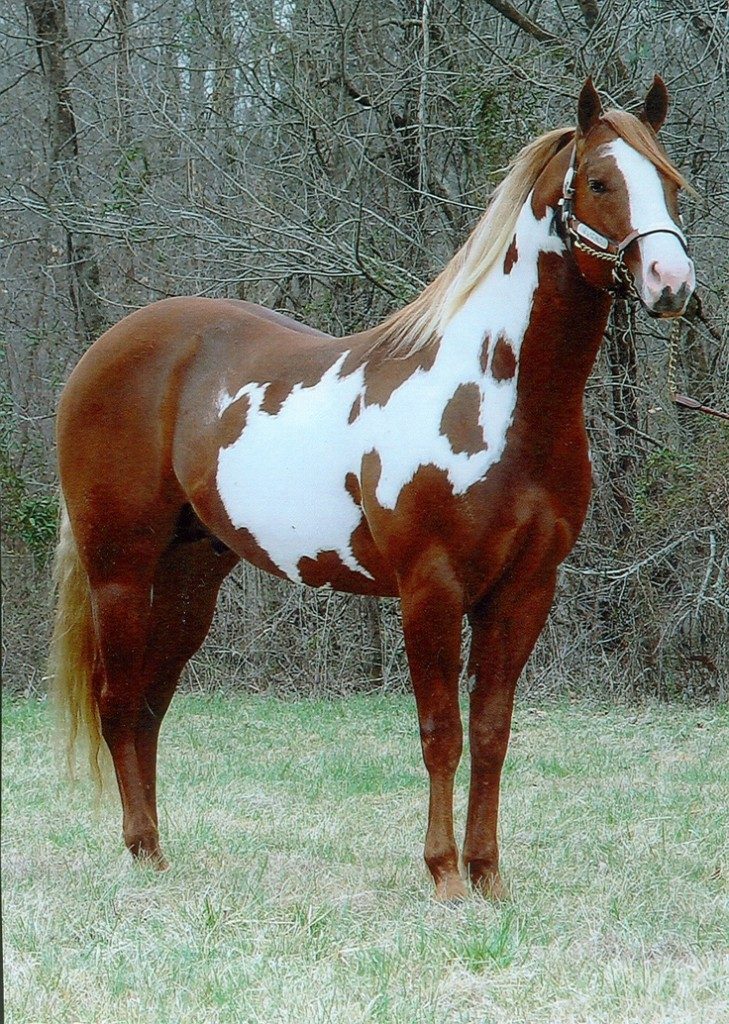 Fascinatingly, the paint horse was initially disregarded by the modern world due to its bold markings, but it is exactly this thing that makes this breed unlike any other. Interest in the breed has actually peaked in recent years. As a result, the American Paint Horse Association is currently the fastest-growing horse association and the second largest one in the United States. We would like to take a closer look at this breed’s history, distinctive features, physical characteristics, strengths, most famous founding horses.

A Brief History of the Paint Horse

If you’ve ever seen a movie about Native Americans or the Wild, Wild West, chances are that you have also caught a glimpse of the unique paint horse. History tells us that today’s American Paint Horse is descended from horses brought to the New World by Spanish Conquistadors. According to historical records, 17 paint-horses were brought to the Americas in 1519 by Hernardo Cortes. During the 17th century, paint horses were quite popular in Europe. Sadly, the ‘trend’ didn’t last very long and some of the newly born horses were shipped to America – to be released in the wild or sold. 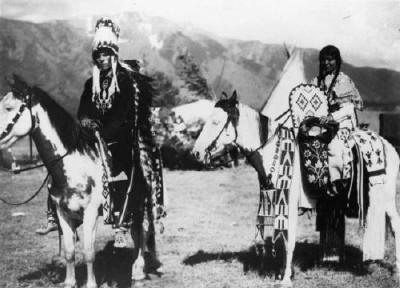 These early paints soon joined the wild herds of Western American and were domesticated by Native Americans. They fit perfectly with core beliefs and traditions of American Indians, who revered the animal’s unique markings. As the first English settlers came to America, paint horses started being used for forging new settlements and herding cattle in the West. At the time, ‘painted’ horses were bred specifically for the United States, which soon became the country with the largest number of pintos in the world. “Pinto” is a Spanish word for ‘painted’ or ‘spotted’.

Depictions of horses with unusual colors were made even before the time of the settlers. In ancient times, horses with spotted patterns were common on pottery and art work. For example, archeologists found evidence of horses with spotted coats in Ancient Egyptian art, on Roman pottery and even in Russian objects. An interesting thing that you might not have known is the fact that the American Paint Horse has a common ancestry with the Thoroughbred and Quarter Horse. As a matter of fact, paint horses can only be registered if they have the same “stock horse” body type of American Quarter Horses. In other words, they must have strong muscles and hindquarters (for sprinting) and a low center of gravity.

The Paint Horse on the North American Plains

It was undoubtedly the Native Americans that contributed the most to paint horse culture. That’s because almost every aspect of their lives – traveling, religion, war, hunting etc. – was connected to their horses. Most tribes had not breeding program for their horses, which lead to great diversity in color and physical characteristics. The only tribe which followed a pattern to improve quality of its horses was Nez Perce, which lived west of the Rocky Mountains. 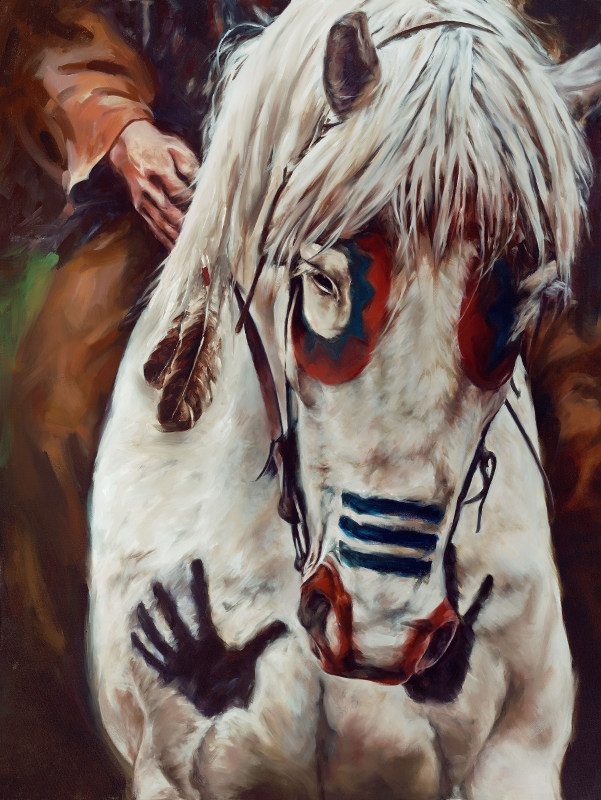 Their goal was to obtain a horse which is good for various jobs including war and hunting. They had a natural inclination towards the paint horse which could effectively drive off herds of buffalo into pens. For Native Americans, a hunting horse was the most valuable possession. Many tribes also chose paint horse names with specific meaning and spiritual power. A few name examples include Kamanchee, Nacoma, Cheveyo, Camachi, Cheyenne, Osceola, Walela etc.

Physical Characteristics of the Paint Horse

Paint horses fall under the category of light horse breeds because they generally weigh less than 1.500 pounds. They are generally used for horseback riding and leisure & trail riding. This doesn’t mean that they do not perform well in competitions. They register good performance for dressage, general riding, rodeo, racing and jumping events. Because they are docile and agile they are also perfect in the show ring and for cattle herding.

Paint horses can be grouped in different categories, either according to their markings & color, or according to country of origin, stock type – saddle type, sport type etc. – and training. Most American paint horses fit into the hunter type class and the stock type class. Most specimens stand less than 16 hands high and they rarely weigh over 1400 pounds. The neck of a paint horse is firm, the legs are slender but strong and the ears are mid-size.

Although regulations in regard to pigmentation aren’t extremely strict, there is a minimum amount of white required for regular breed registry. In addition to this, paint horses have three main color patterns:

As we already mentioned, the identity of a paint horse is partly defined by its colorful coat. Most paint horses have white coats combined with unusual colors such as grullo, palomino, buckskin,  red dun, gray, blue roan, bay, cremello, brown, chesnut, breyer bray, grullo, black, perlino or red roan. There is no way to control the frequency, size or shape of markings but breeders say that most specimens are predominantly white or dark in color.

Due to genetic problems that may arise from improper breeding programs (example: white foal condition), paint horses are generally paired according to their pattern type. Different patterns will result in sturdier bloodlines and more vitality for markings. 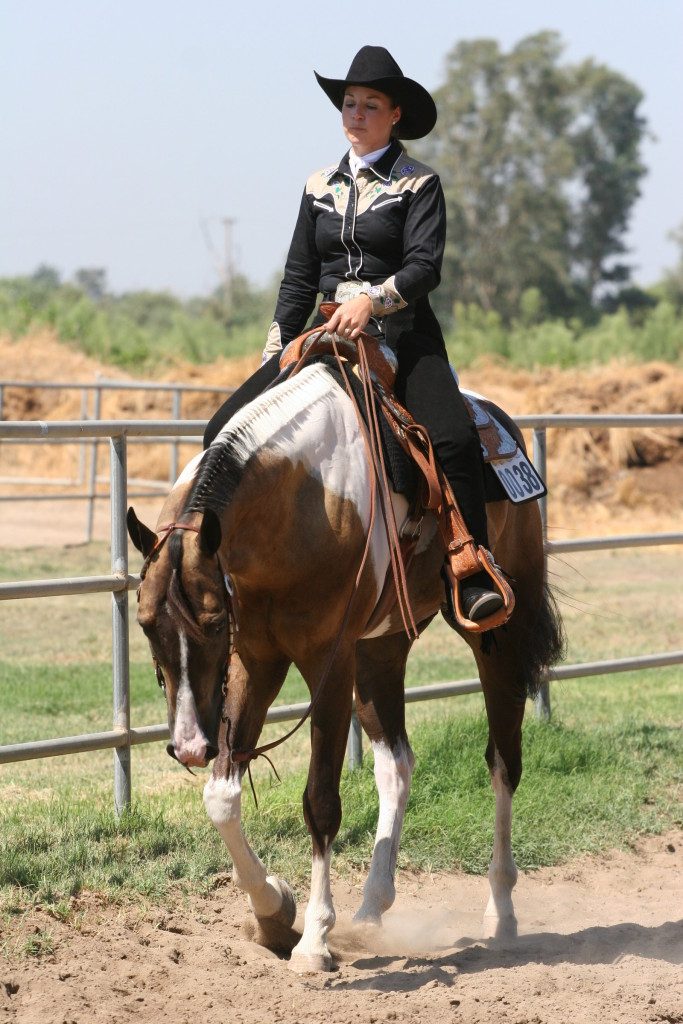 Paints aren’t just beautiful and athletic. They are also incredibly intelligent, graceful, obedient and willing to please. This means that they can be trained easily and can be ridden by amateurs as well as professionals. They are competitive and hard-working horses that will perform on the field just as well as on the riding trail or dressage ring. The paint horse feels more at home with western disciplines such as roping, cutting or reining. Due to their unusual speed and good stamina they are also well-suited for barrel racing and jumping.

All in all, paint horses are easy to keep. The only concern should be overfeeding or lack of exercise. Some of them carry a lethal white gene which does not affect the foal during or before birth but it usuall leads to complications and death. This is why breeders are only allowed to pair two paint horses if it has been proved that none of them carry the lethal white gene (OLWS). At the moment there is no remedy for this condition. To avoid complications DNA blood tests are conducted prior to breeding.

When it comes to horses, it is very difficult to give a price estimate. Even if most American Paint Horses are reasonably priced and a specimen destined for pleasure can cost around 5.000 dollars, it’s an entirely different story for horses with successful show records or extensive training. You can easily find a good paint horse for sale on the American Paint Horse Association page or other smaller association pages which host private auctions.

States like California, Washington, Arkansas, Tennessee, Florida, Wisconsin, Georgia, Carolina, Virginia, Kentucky, Oregon, Michigan, Iowa, Ohio, Indiana, Louisiana, Mississippi, Montana, Kansas, Oklahoma, Alabama, Illinois, Arizona or Utah have their own associations and clubs where you can find the latest paint horse for sale listings. For example, you can check out paint horses for sale in Texas by accessing specific pages such as DreamHorse or HorseClicks.

In addition to this there is EquineNow, one of the largest online markets for horse sales. All you have to do is to filter your search for paint horses + a specific zone. Each listing contains details such as date of birth, registry, color, sex, markings and price. Each listing is also accompanied by several paint horse pictures. You will see that there are many cheap paint horses for sale on websites like Equine. All you have to do is to search for them.

There are several paints with unusual pedigree that left their mark on the breed’s history. Let’s take a look at three of the most famous ones: 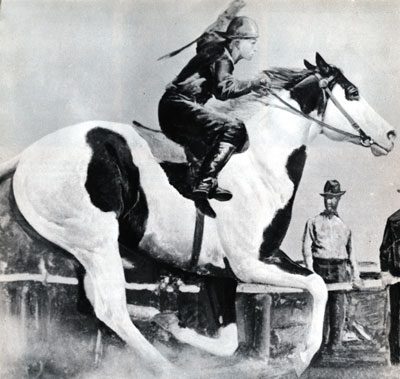 The American Paint Horse Association (APHA) was founded in 1965, when two different registries, one for Quarter Horse bloodlines and the other for pinto-colored horses, merged into one. APQHA and APSHA became one large association dedicated to the protection of paint horses and enforcing breeding rules that would result in stronger bloodlines.

The APHA is in charge of overseeing horse shows. It also holds the annual Youth World Championship Paint Horse Show and the Amateur World Championship Paint Horse Show. Incentives for racing in horse shows as well as discounts for products can also be obtained through the association. Currently, APHA holds a journal for every registered paint, to track ownership changes and genetic diseases or performance. Lastly, the organization offers trail programs for enthusiasts, including pleasure riding. 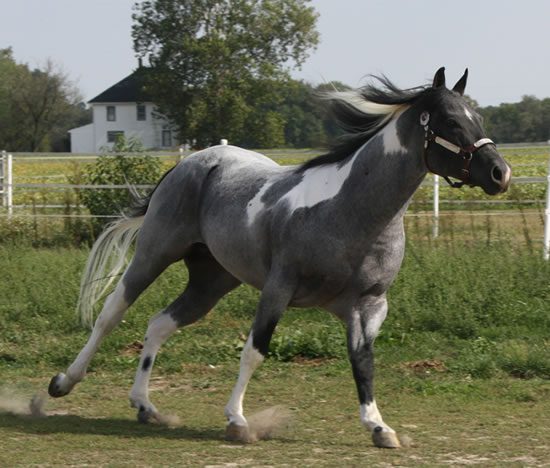 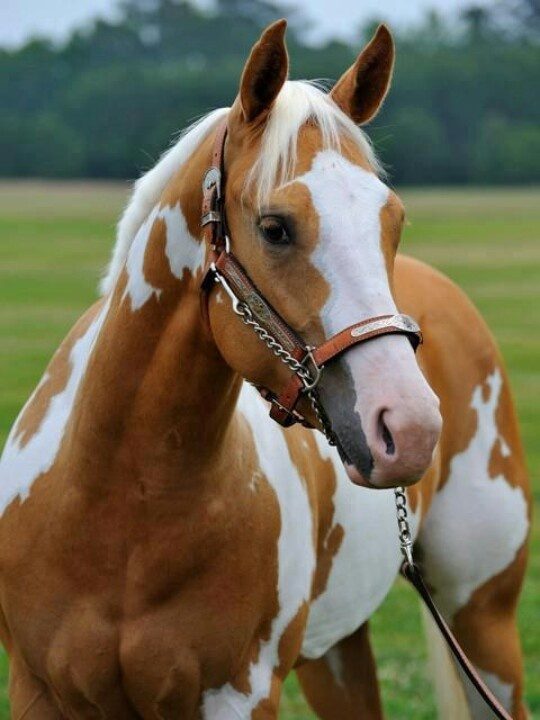 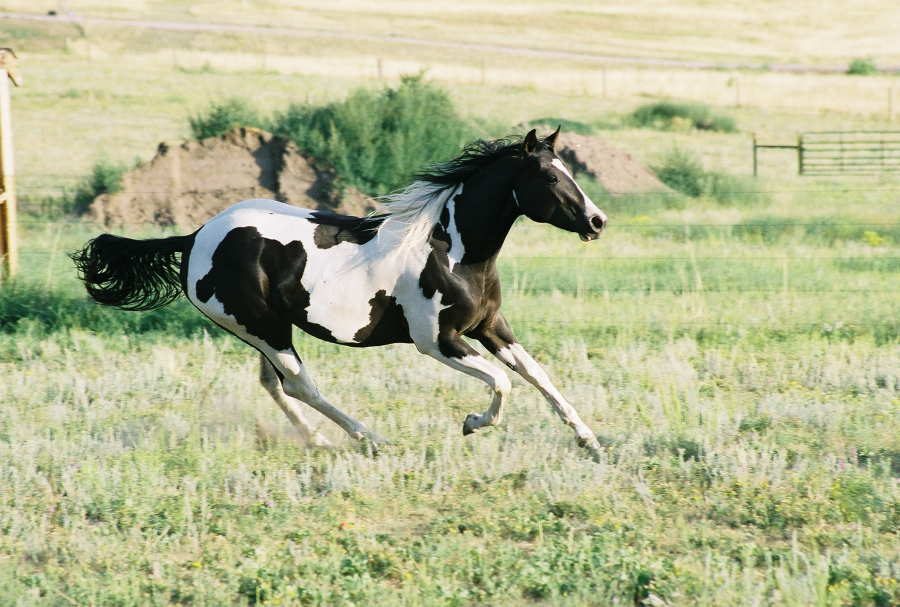 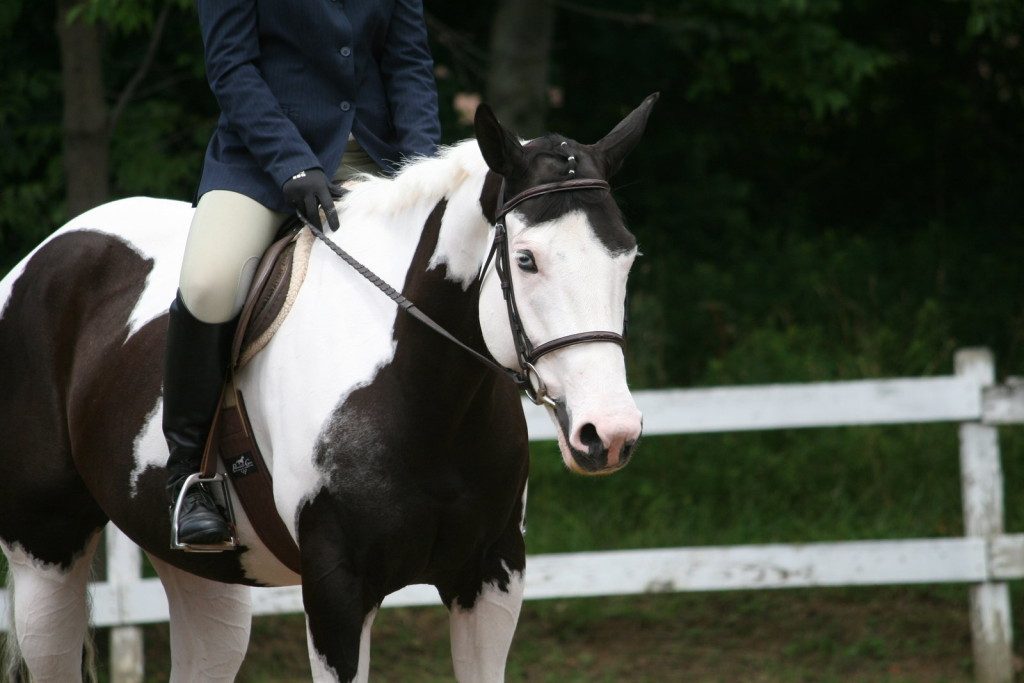 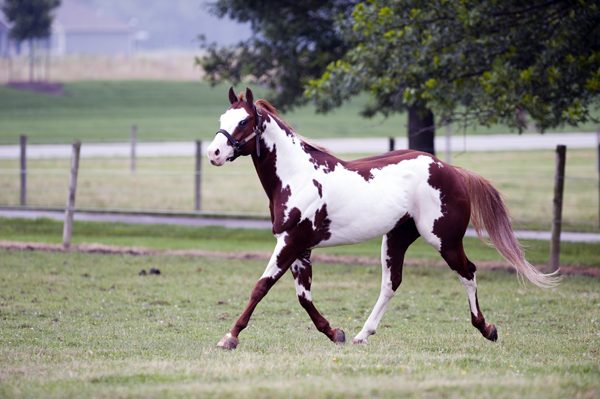 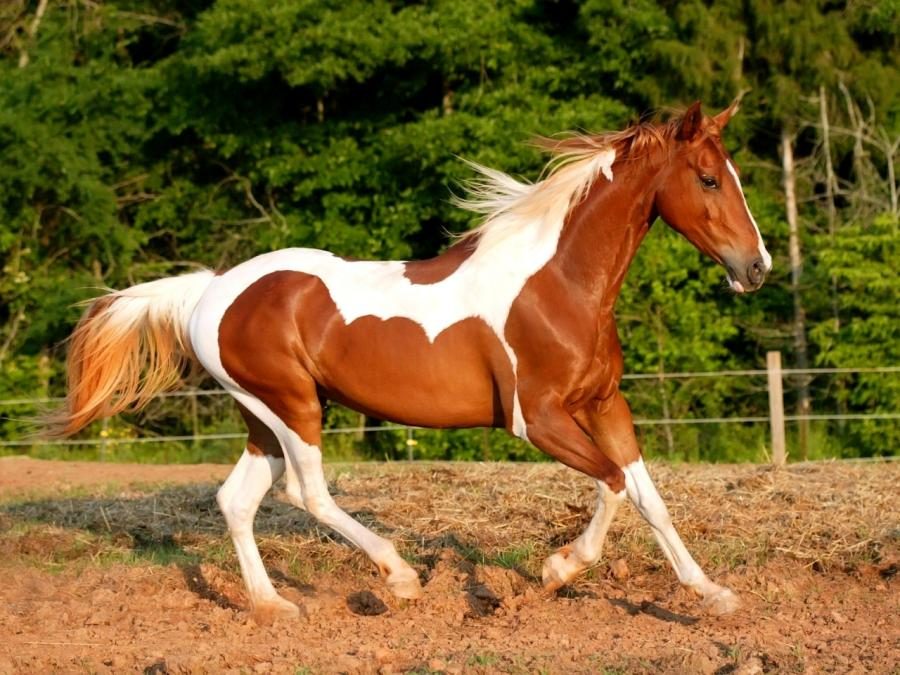