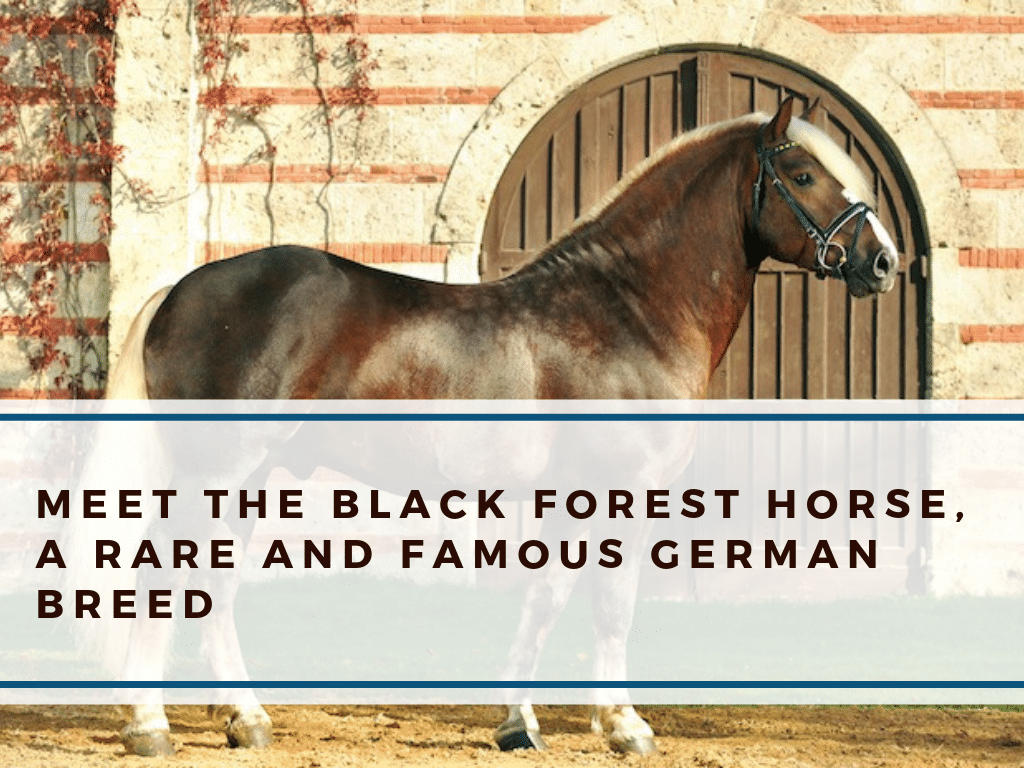 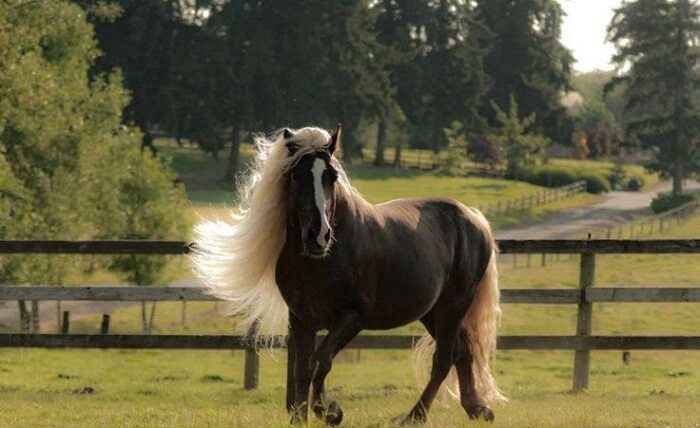 The Black Forest Chestnut can trace its origins to the 1400s. As the name suggests, the breed was developed in the Black Forest of Germany using the French draft breed the Breton and the Austrian small draft horse the Noriker. Although these breeds come in many colors, the dark chestnut with flaxen mane and tail became the preferred color which is found today. The breed was so popular in Germany by the 1800s that a stud book was published.

Both World Wars and the intrigue of agriculture almost dealt a double death-blow to the breed. Who needed a draft horse anymore? Fortunately, a few people did, and the “Pearls of the Black Forest” was saved from extinction. The breed has been gradually built up from a handful saved from World War II. The government stud in Marbach is the breed’s main home. Horses must perform stringent, physical tests before they are allowed to be registered and bred. The first Black Forest horses were imported to America in 2001.

This breed was created to be the best working horse for Black Forest farmers and forestry workers. Not only was the German Black Forest horse able to stay healthy and strong on scant food, but he was to be gentle and beautiful as well.

When it comes to Black Forest Horse bloodline, there are six. The oldest bloodlines are the D line and M line. Next are the R line and W line. The most recent ones are the F line and V line. The D, M, and R lines are smaller and more compact (14.2 to 15.2 hands). Meanwhile, the W, F, and V lines are larger in size and stature (15 to 16 hands).

The German Black Forest horse is a muscular and compact breed and yet moves with smooth grace. They average 15 hands but can vary in size from 14.2 to 16 hands. They have small ears, large eyes, and straight profiles, giving them a friendly and attractive expression. The chest is broad, back short and hindquarters well-rounded. The legs may seem short in comparison to the rest of the body, but they are strong and swift.

The color is a shade of chestnut, from bright red to nearly black. The mane and tail are lighter colored, ranging from various shades of flaxen and tan to an almost pure white. White markings on the legs and face are common. There is light feathering or hair on the legs. The mane and tail can become very long and wavy.

Horse people, as well as books and websites on horses, refer to draft horses like the Black Forest horse as “coldblooded.” This does not refer to the horse’s actual blood temperature. It’s just another way of saying that the horse has a gentle temperament and does not spook easily. The Black Forest horse fits the description “coldblooded” exactly since it is gentle and trainable. They tend to like people and other animals.

Painting by Nicole Bueckert, credit: dragoart.com. If you like this artist, support their work.

Since Black Forest horses are so rare and bred on very few farms in North America, purchasing one cost many thousands of dollars. Not only is the cost of the horse involved, but also any import fees if the horse has been bought outside of the owner’s home country. Although Black Forest Chestnuts are considered hardy horses, they still need plenty of care to make the horse happy and healthy. According to the popular magazine The Horse, yearly expenses for owning a single horse average:

Today the Black Forest Chestnut performs a wide variety of jobs from breeding more Black Forest Chestnuts to helping disabled children and adults learn new coordination skills and confidence from horseback riding. These gentle giants make great riding horses for children or the handicapped. They also give a vigorous ride for any non-disabled adult. Their intelligence and graceful movements make them naturals for equitation or dressage.

Many Black Forest horses still work in harness, whether singly or in pairs. They are the horses of choice for pulling beer wagons for German brewery promotions. They work in the tourist industry pulling carriages or sleighs. They also are preferred in the forestry industry on sloping hills or other paths too narrow or too muddy for machines. They also have been mounts for trick riders.

A Black Forest Horse has to go through a strict selection process by the state selection committee at three years old. Multiple inspections should be passed. Conformation, movement, and overall appearance comprise the first inspection. The second inspection is a performance test (driving and pulling). Also included in the judging are overall disposition (willingness to perform, character, temperament), basic gaits, and performance potential.

If young stallions pass all these tests, they earn the title of “state-approved stallion.” They will be allowed by the state to breed with state-approved and registered mares. But observations aren’t over after stallions have become state-approved. They will be continually watched over the following years. If they produce outstanding offspring on a consistent basis, they can receive the title “premium stallion” and possibly the “elite stallion” title. If the state doesn’t approve a stallion, he is not allowed to breed. Instead, he will be gelded and will become a driving or riding horse.

The Black Forest horse is a sturdy draft horse that was originally bred for working on German farmlands and forests. A hardy breed, they can handle long winters in the highlands. As the need for farm animals declined, they’re now being used mostly for horse riding and as coach horses. The Black Forest is scarce and beautiful horses that are strong, durable, clever, and sound. Because of their gentle and sweet nature, they are considered as an excellent all-around horse.

The Black Forest horse is a sturdy draft horse that was originally bred for working on German farmlands and forests. A hardy breed, they can handle long winters in the highlands. As the need for farm animals declined, they’re now being used mostly for horse riding and as coach horses. The German Black Forest horse is very rare and beautiful. They are strong, durable, clever, and sound. Because of their gentle and sweet nature, they are considered as an excellent all-around horse.