One of the most unusual and distinctive horse breeds on the planet is the Fjord (pronounced FEE ord) horse. This ancient breed is known by a variety of names such as the Norwegian Fjord, the Norwegian Dun, Norwegian Pony, Westerland, Northern Dun and in Norway is called the Fjording. No matter what name you call it, the Fjord horse is an unforgettable equine.

History and Origins of the Fjord Horse

The Fjord horse has roots in Viking culture. According to the International Museum of the Horse in Kentucky, surviving artifacts from Viking burial grounds as old as 2000 BC have shown short, sturdy horses accompanying Vikings on their fearsome adventures. Since the Vikings were always up for a conquest in search of more lands, booty and women, Fjords spread in parts of Europe where the Vikings landed. Fjords are thought to have contributed to the many British native pony breeds, the Icelandic horse and the Swedish Gotland.

Bonnie Hendricks’s 1995 classic, International Encyclopedia of Horse Breeds, notes that the modern Fjord horse is slightly different from the Fjord of thousand or more years ago. This is because organized efforts at breeding purebred Fjords did not start until about 1850. In that time, Fjords were smaller and rarely grew over 12.1 hands high and appeared in far more colors than various shades of dun.

The breed was standardized about 1910. The first Fjords were exported to America in 1950 and have been a hit there ever since. The Norwegian Fjord Horse Registry, founded in 1977, reports that there are about 5,100 Fjords in America.

Physical Characteristics of the Fjord Horse

Although they are pony-sized at 13.2 – 14.2 hands high, Fjord horses are built like draft horses. They are thick-bodied with a heavily crested neck and blocky yet pleasingly balanced head. Their legs may seem slightly short for their thick bodies, but the legs are thick-boned and strong enough so that a Fjord can easily carry a six-foot rider. Their hindquarters are rounded and backs are short, which also helps give this little horse surprising strength. Occasionally a Fjord horse will grow to 15 hands and weigh more than a ton, but this is rare.

Colors are mostly shades of dun, often with zebra markings on the legs and a dorsal stripe down the spine. Hooves are usually black but grey also appears. Red dun foals often have white hooves but they turn to grey or black when the foal grows into a horse. The tail is thick and the main course. The main grows straight up for about four inches before it begins to flop over. Fjord manes are often trimmed to just show the impressive high-standing hairs, which are often of mixed colors.

One reason the Fjord horse has survived for so long is that it possesses an excellent temperament for getting along with people and new situations. These are easy-going horses that are confident and adaptable. They are usually not as prone to spook or runaway with a rider as other breeds. They are very intelligent and learn quickly. They needed to be intelligent in order to survive outdoors in Norway and cope with the varied environment. 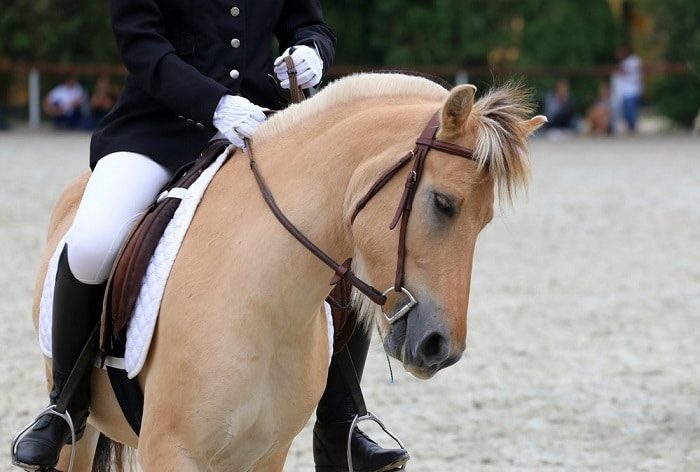 Having a Fjord Horse

Owning any horse, let alone a Fjord horse, is very expensive. Since the breed is rare in America, purchasing a purebred costs at least $1500 for a weanling. Older horses can cost many thousands of dollars. Occasionally one comes up for adoption at a horse rescue facility, but expect to pay around $1000 in adoption fees.

According to a study by the University of Maine, the average cost of owning one horse is nearly $4000 per year. These expenses vary widely depending on how well the hay, feed and bedding crops have been for the year. Other costs include:

Fjord horses can be used for a wide variety of equine sports and activities. They jump, pull wagons and can be ridden in English or Western tack. They make excellent trail horses as they are intelligent enough to deal with rocky or widely varying terrain. They also make excellent pack horses since they are so strong and sure-footed. They make good mounts for riding schools or beginner riders. They work well in handicapped riding programs, since the awkward movements of handicapped riders do not panic them. In Norway, the Fjord is the breed of choice for the tourist industry.

Fjords have competed successfully in lower level dressage, three day-eventing, hunter and jumping classes, combined driving and trail riding classes. There are classes just for Fjords or for all breeds. They also make great pleasure riding horses, or horses that owners want to ride or drive but not necessarily show. Fjords were used to pull carriages for Olympians and tourists during the 1994 Lillehammer winter Olympics.