What Is the Largest Horse Breed? It's Probably Not What You Think

Whether you’re a rider, breeder, or just an admirer from afar, horses have a rich and interesting history alongside humankind. Before the motorized engine, horses were our main source of power — the bigger and stronger the better. However, many people don’t know the true answer to, “What is the largest horse breed?”

Ask most people the question, “What is the largest horse breed?” and they’ll probably answer with: the Clydesdale. But that actually isn’t the case!

The largest horse breed known, at least in the modern world, is the Shire horse. This breed, known as Britain’s “Great Horse,” is officially recognized as the largest horse in the world.

Technically, you can find Clydesdales that are bigger than Shire horses. But, on average, the Shire horse reigns supreme.

Like the Clydesdale, the Shire breed features distinctive tufts of hair above the hooves and a thick, muscled frame. Most Shire horses have dark brown, black, or grey coats across the rest of their bodies.

Of course, it’s not unusual to wonder how a giant like the Shire horse (or any of its slightly smaller counterparts) first came to be. Even in the Ice Age, when megafauna ruled the globe, ancestral horses were quite small.

But the story of the Shire horse is the same as countless other modern animals. Human intervention brought this gentle giant into existence.

By focusing breeding efforts on larger horses (in early-1500s England, farmers were actually encouraged to kill small horses so they wouldn’t infiltrate the gene pool), giant horse breeds like the Shire emerged. And these monstrous breeds served a variety of purposes.

So, what is the largest horse breed, the Shire, known for throughout history?

First, the Shire horse built its reputation as a strong, unfaltering warhorse.

According to many historical accounts, the Shire horse was the steed of choice for armored knights riding into battle. After all, what other horse could have carried the weight of their soldier, on top of any armor the horse itself may have worn?

Like most centuries-old history, many people doubt these claims. However, there’s a reason why the Shire horse also goes by the Great Horse and the War-Horse.

In a time when engines of any kind were a distant dream, these animals were often the best source of power one could find. Literally, horsepower.

But, long before genetics were understood, the breed was dampered by its small, restrictive gene pool. There were only so many horses on the British islands with which to cross-breed.

So, like most large draft horses we still see today, the Shire horse was crossed with other large horses from around Europe. This introduction of new genes made the Shire breed even bigger, stronger, and healthier than it already was.

After these new genetic lines were introduced, the Shire horse took off in the agricultural and industrial worlds. These horses were the workers of choice for farmland. Plus, with the growing popularity of developed roads and the horse-drawn carriage, there was no shortage of use for the Shire horse.

Around this time, the Shire breed was also imported to the Americas. It would take some time, but this horse breed would soon dominate the agriculture industry there, as well.

But the Shire horse wasn’t done with its days of battle. During both World War I and II, Shire horses were responsible for hauling heavy artillery machinery across the battlefield.

With the industrial boom happening in Europe and North America, there were plenty of these heavyweight horses to go around.

However, when the fighting was over and it was time to come home, the Shire’s popularity had also come to an end.

Automobiles and motorized farm equipment were becoming more accessible to the average person, eliminating the need for Shire horses in agriculture or transportation. Even those who did still use horses started opting for smaller breeds, instead.

What was once one of the most prevalent draft horse breeds in the world would quickly diminish throughout the next century.

Now, most Shire horses live a life of luxury as recreational riding or companion animals.

Since the Shire breed no longer has a role in the day-to-day functions of society, their number has rapidly declined. Some sources even estimate that the breed’s population has dipped below 1,500 worldwide.

But the Shire horse hasn’t completely lost its purpose.

Today, you can find many breweries that employ these horses in the hauling of beer carts. While Budweiser might have solidified the Clydesdale’s popularity in the United States, the Shire horse enjoys the same beer-celebrity status across the pond.

You can also watch these horses flaunt their strength in competitive weight- and plow-pulling events around the world.

The Shire horse might be the official answer to, “What is the largest horse breed?” But it has plenty of competition!

As we mentioned, the Clydesdale and Shire are quite close in size. Some Clydesdales even outgrow their Shire counterparts.

However, the list of giant horses doesn’t stop with these two breeds. Here are all of the breeds that make up the top five horse breeds in the world (after the Shire, of course):

It’s no surprise that the Clydesdale takes second place in this competition. They’re certainly the most famous, at least in the Americas, of the large horse breeds.

The Clydesdale’s history and appearance are quite similar to the Shire horse.

In fact, this breed get its name from its county of origin. Now called Lanarkshire, this southern Scotland county is believed to be where the Clydesdale first appeared. 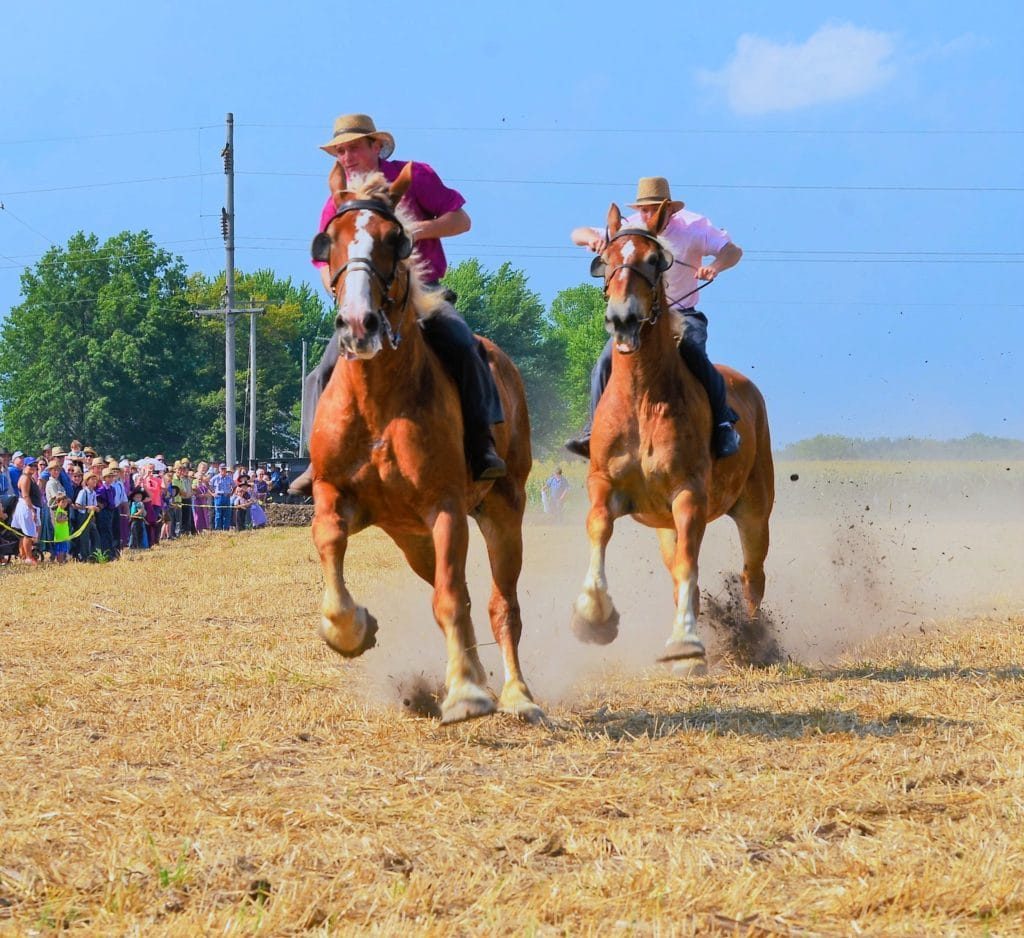 The Belgian draft horse is lesser-known among the large horse breeds. But it comes in third place, just after the Shire and Clydesdale.

As the name implies, the Belgian draft breed of horses originates in Belgium. With ties to medieval warfare and reported lineage culminating in Europe’s Great Horse, it’s very likely that the modern Shire breed and Belgian drafts share the same ancestors. 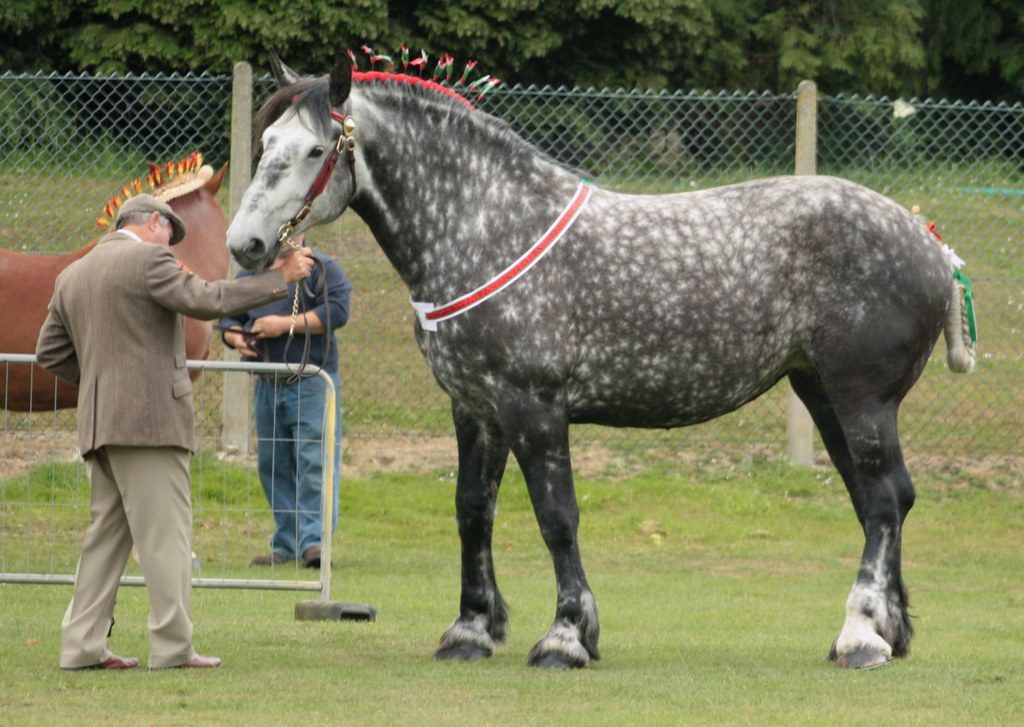 Hailing from France, the Perc​​heron is another runner-up for, “What is the largest horse breed?” But the United States played a large role in its popularity as a working breed.

Imported over to the Americas in the 1800s, the Percheron eventually beat out the Shire as the most popular draft horse in the country.

Unlike the Shire horse and its waning popularity, the Percheron still has an extremely stable population around the world. As of 2013, there were over 30,000 individual Percheron horses on record.

Finally, the Dutch draft horse fills in spot five on our list of the largest horse breeds. This breed bears a striking resemblance to the Belgian draft, which makes quite a bit of sense since they are closely related!

Though the Dutch draft is now a distinct breed, it likely came about by branching from the Belgian draft genetic line. Both large horse breeds share a relation to the Zeeland horse, a Dutch horse breed with a stocky, short-legged build (despite its large total size) that was popular from the 17th to the 20th centuries.

Like most large horse breeds, the Dutch draft is much less prevalent than it once was. But you can still find this gentle beast throughout many of Holland’s rural provinces.

Here are some other questions you might be wondering about:

As far as personality goes, a larger horse breed can be just as sweet and relaxed as a smaller horse. But they can also be just as nervous and flighty as their smaller relatives.

However, you should think twice before choosing a draft horse or other larger breed as a companion horse.

When smaller horses get scared or upset, they can do a lot of physical damage. Even the sweetest horse can be dangerous at the wrong time or place.

When startled or upset, a larger breed is exponentially more dangerous.

Of course, larger horse breeds can be excellent recreational or hobby horses!

But if you’re thinking about investing in one of these animals for an inexperienced or young horse lover, we suggest thinking about the potential consequences if something goes wrong.

Knowing the answer to what is the largest horse breed might take into account the big picture. But it doesn’t account for individual horses that tip the scale through sheer luck and genetics.

As of 2010, the largest horse in the world is Big Jake. This handsome giant lives in Poynette, Wisconsin, and comes from the Belgian draft breed.

As you can see, being a member of the largest horse breed in the world doesn’t always mean you’ll be the biggest horse in the field!

Regardless of your reason for asking, “What is the largest horse breed?”, the answer to this question is shrouded deep in technological development and social changes. Without the need for agricultural power and reliable transportation, few (if any) of these large breeds likely would have existed.

But these horses aren’t just quiet machines that dutifully perform their assigned work. They are also intelligent creatures that learn, communicate, and experience emotions. And we should respect them as such.

Remember, large horse breeds can be just as friendly and gentle as their smaller relatives, even more so in some cases. However, their larger size makes them an inherent danger for inexperienced riders or children.

Every horse should be approached with respectful caution, no matter their size. But we also urge you not to take the sheer size and strength of these creatures for granted.

Did one of your favorite large horse breeds not make our list? Let us know in the comment section below!